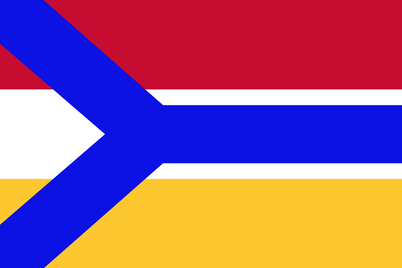 The federal flag is taken from the People's Union of Occitania. Only modification, the hue of blue, more vivid.

"Three horizontal bands (Yellow and red symbolize Aragon, Catalonia and Occitania, white symbolize peace) and a blue pall, a central blue band that splits into a horizontal Y, who symbolize the rivers of the country."

The civil flag was mentioned in the first official text of the Union of Nova-Occitania: the declaration of sovereignty.
"We carry for flag, the representation of the sky as it is in this evening of declaration of independence, the red star of Antares to guide us."

Currently the country does not have any coat of arms. The Constitutional Commission has issued a call for tenders for the realization of this symbol.

Our motto is in spanish " Casa dividida es casa caida " who in english language means "Divided house is falling house". This motto calls for the unity of the nation.